When 4-year-old K.J. Griffin arrived at MUSC Shawn Jenkins Children’s Hospital in Charleston, South Carolina, the normally bubbly boy who loves to ride his bike and play outside with his friends was frighteningly limp.

His mother was stunned and exhausted. The little boy she’d worried about for days as his fever spiked had already been to a hospital near their home in rural Smoaks. But the condition K.J. was suffering from was so new and rare that it went unrecognized.

So Talaiyah Stephens watched over her son at home, doing what she could to ease his symptoms but feeling helpless as he got sicker and sicker. “He didn’t want to talk. All he would do was sleep. He’d wake up, throw up, go to the bathroom, then lay back down and go to sleep. He would look at you like he was staring right through you.”

When K.J.’s fever rose to 105 degrees and wouldn’t come down, Stephens came to a decision. She would drive him to MUSC Shawn Jenkins Children’s Hospital, about an hour and 15 minutes away. It was a choice that saved his life.

When they got to the hospital, K.J. was in shock, meaning his body wasn’t getting enough blood flow to his vital organs. His heart was dangerously inflamed. He needed immediate treatment to prevent organ damage.

As doctors worked to save K.J., they suspected he had MIS-C. Multisystem inflammatory syndrome in children is a rare complication of COVID-19 that shows up after the virus has left the body. It’s been described as an immune reaction gone haywire. A test for COVID-19 antibodies came back positive a few days later, helping to confirm their suspicion.

K.J.’s mother learned that for days, her son’s body had been locked in a battle that nobody could win. But now that she and his medical team knew what the problem was — an overreaction of his immune system to a virus she hadn’t even realized he’d had — they could fight back. 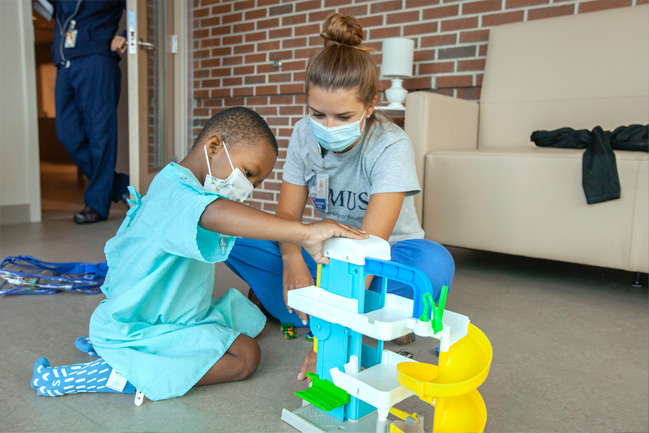 K.J. Griffin plays with nurse Amber Ryan the day after receiving his first infusion of remestemcel-L.

Doctors immediately gave K.J. the standard treatment for MIS-C, including high-dose steroids, intravenous immunoglobulins and high-dose aspirin to try to help calm his overactive immune system. He also got medicine to help his heart and blood vessels work better and a blood thinner to help prevent clots.

But Stephens learned they could do more than that. MUSC Shawn Jenkins Children’s Hospital is the first in the country authorized to give children with MIS-C who meet certain criteria a potential treatment called remestemcel-L, brand name Ryoncil, made by Mesoblast Limited. It uses mesenchymal stromal cells from the bone marrow of healthy donors. Those cells may be able to help regulate the immune systems of children with MIS-C and repair damaged tissue.

The treatment was actually developed for another purpose: to try to treat stem cell transplant patients who develop graft-versus-host disease, GVHD, that doesn’t respond to steroid treatments. GVHD occurs when transplanted stem cells mount an immune system attack against the recipient’s body. The hope is that the treatment will work against MIS-C, too, because it's also a harmful immune system reaction to a perceived enemy.

K.J. qualified for the clinical trial and received the treatment through two IV infusions.

Pediatric infectious diseases specialist Allison Eckard, M.D., is leading the trial. “He definitely was starting to improve just with supportive care and our typical therapeutics,” she said.

“But on the day we administered the first infusion, he still had evidence of cardiac dysfunction. The other worrisome elements of his level of disease at that point were his inflammatory markers. In particular, his D-dimer, which is a marker of coagulation, was very high. And we worry when levels are that high that you’re at very high risk of a serious blood clot.”

Cardiologist Andrew Atz, M.D., chairman of pediatrics at the Medical University of South Carolina, said that after receiving remestemcel-L, K.J.’s markers improved dramatically. “He had very abnormal heart function. But the day of his discharge, his heart function had not only improved but was better than normal.”

K.J.’s D-dimer came down, too, to Eckard’s relief. She called the developments exciting. “I really do think that this product has a potential large impact on MIS-C and perhaps even Kawasaki disease in children.” Kawasaki disease, like MIS-C, causes inflammation throughout the body.

But Atz said that at this point, remestemcel-L is not first-line therapy for MIS-C. “This shows very good promise, and I could imagine this becoming over time, with more research, potentially a first-line treatment.

“The first step is making sure it can be delivered safely. That was clearly answered yes in this case, as K.J. slept soundly through both hour-long infusions. Although this initial study is not designed to prove that remestemcel-L results in clinical improvement, we were able to clearly demonstrate improved heart function and decreased inflammation.”

The doctors said it’s important to test possible treatments, such as remestemcel-L, for MIS-C as the coronavirus pandemic continues and more children are diagnosed with MIS-C. More than a dozen children in South Carolina have been diagnosed with MIS-C so far, including seven treated at MUSC Shawn Jenkins Children’s Hospital. All survived.

But children in other states have not been as fortunate, Eckard said. “The CDC is reporting 11 deaths from MIS-C so far. As pediatricians, we don’t want to see any deaths in children.”

One challenge in diagnosing MIS-C is that its symptoms may make it look like the child has a virus, appendicitis, a lymph node problem or something else. Those symptoms include a fever, extreme fatigue, stomach pain, vomiting and diarrhea, like K.J. had.?

Kids with MIS-C may also have a rash, bloodshot eyes, swollen lymph nodes and a bright red, bumpy tongue. Often, their families had no idea the children were ever infected with COVID-19 or even around someone with the virus.

K.J. is one of the lucky ones. Thanks to his mom’s decision to bring him to Charleston, he’s on the mend. On a sunny afternoon in the MUSC Shawn Jenkins Children’s Hospital’s intensive care unit, two days before he and his mom would go home again, K.J. was a bundle of energy. He played with toy cars as a pair of nurses sat on the floor with him.

His mother sat on a sofa watching. “He’s back to his normal self,” she said. “It’s a huge difference.”

She wants other parents to be aware that while MIS-C is rare, it’s out there. “Take it seriously.” 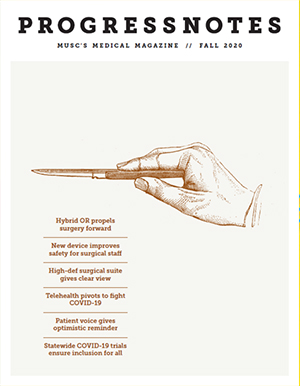