Stemming from the Greek word pankreas, which translates to “all flesh,” the pancreas contains no bone or cartilage but could be considered the backbone of the human digestive process. Flat and 6 inches long, this fleshy organ was first described as a gland by a Greek surgeon named Herophilus in 300 BCE and was officially named the pancreas by another Greek surgeon and anatomist, Ruphos, 200 years later.

The pancreas is responsible for producing and secreting the enzymes and hormones necessary for human digestion and blood sugar regulation. Islet cells — endocrine cells that produce the essential hormones insulin and glucagon and then secrete them into the bloodstream — are critical to this process. Without proper levels of either hormone, people can develop diabetes.

And if these hormones are activated while still in the pancreas, they can become inflamed and cause debilitating pain in the form of either acute or chronic pancreatitis. Enough instances of acute pancreatitis and the pancreas can become damaged permanently and require removal.

At MUSC Health, surgeons offer islet cell auto-transplantation in combination with complete pancreatectomy to patients with chronic pancreatitis as a solution to the intense pain that coincides with the condition, but without the likelihood of developing diabetes that would occur with removal of the pancreas alone.

“Whether it be genetic, alcohol-induced or idiopathic,” said Kelsey Cook, the MUSC Health islet cell transplant program coordinator, “Patients who have reached a debilitating point of constant pain can improve their quality of life with this surgery.”

MUSC Health houses the number 2 islet cell transplant program in the world by case load, and MUSC surgeons have performed more than 275 islet cell transplant procedures since the program’s inception in 2009. Program clinical director and gastrointestinal surgeon Katy Morgan, M.D., and her partner David Adams, M.D., who has since retired, started the program over 12 years ago, and since then have been joined by gastrointestinal surgeon William Lancaster, M.D. 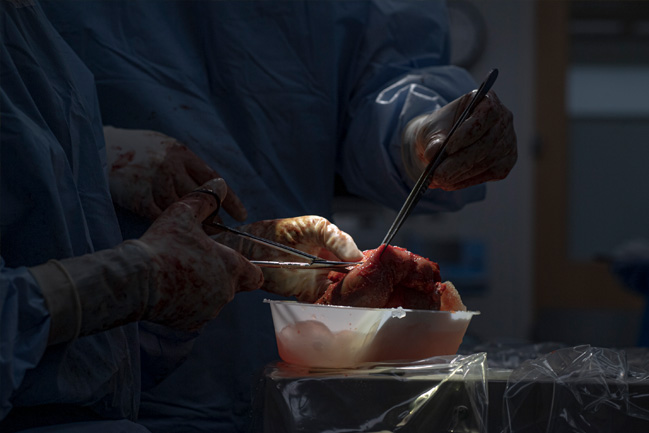 With an islet cell transplant, a patient’s own islet cells are extracted from their pancreas and transplanted into their liver to provide the digestive function previously provided by the pancreas. Credit: Brennan Wesley

Between Morgan and Lancaster, MUSC Health performs between 20 and 25 of these surgeries per year. But it’s important that the patients who benefit the most from the surgery are those with a genetic form of pancreatitis compared to those with alcohol-induced or even idiopathic pancreatitis.

For many patients, pancreatitis can improve with lifestyle changes. For instance, someone with alcohol-induced pancreatitis will likely have less pain if they abstain from drinking. But for patients with an underlying genetic mutation (common ones include CFTR, Spank and PRSS), the pancreatitis will not subside without an intervention like islet cell transplantation.

Morgan finds working with these patients especially rewarding. “This group is unique and has often been suffering for a while,” she said. “These patients have had their lives taken away by debilitating pain, and it’s really rewarding to help them get back to doing the things they enjoy – whether that be enjoying their family, their community, or just getting back to their lives.”

With an islet cell transplant, a patient’s own islet cells are extracted from their pancreas and transplanted into their liver to provide the digestive function previously provided by the pancreas. In chronic pancreatitis, the liver begins to degrade and will eventually be ineffective in aiding digestion, which can lead to diabetes as well as other issues. According to Morgan, after a patient has exhausted other potential treatments, such as pain medication, IV fluids, enzyme supplements and changes in diet, they can consider islet cell transplantation as an option.

With an auto-transplantation following a total pancreatectomy, a patient’s gallbladder, spleen and entire pancreas are removed. Their pancreas is then taken to a clean lab, a completely sterile space, in order to extract remaining healthy islet cells from the pancreas. Once the cells are harvested, the clean lab can determine which are the healthiest, mix them into a heparin solution, purify them and transplant them back into the patient’s liver through the portal vein.

With one of only 20 clean labs in the country, MUSC Health gives patients the added benefit of having this vital space available on campus. While there are other programs with islet cell surgery, they often have to ship the pancreas to an off-campus clean lab in order to perform the islet cell extraction, according to Cook, and this leaves room for error. At MUSC, the surgery is completed on the same day, and the pancreas remains on campus the entire time. Patients undergo their pancreatectomy in the morning and then receive their transplant that afternoon, remaining under anesthesia the entire time.

Hongjun Wang, Ph.D., is the head of MUSC Health’s clean lab and specifically studies islet cell transplantation as a treatment for both chronic pancreatitis and type 1 diabetes. She points to novel cellular and other therapeutic tools as a way of helping patients in her lab. 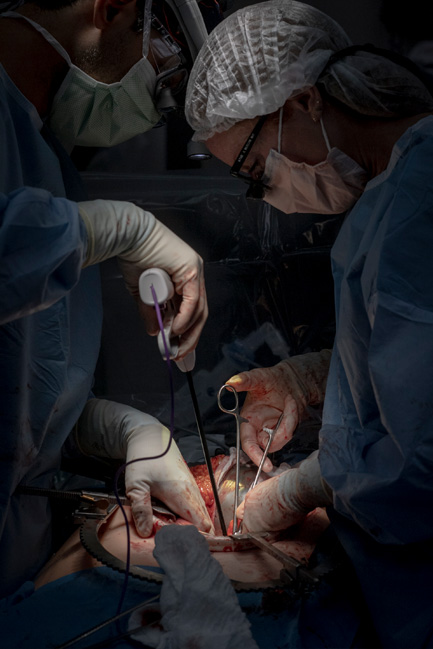 When islet cells enter the liver through the portal vein, they act as a free graft. When MUSC’s cellular lab therapists separate islet cells from the exocrine tissue, they maintain the cells’ integrity as a cluster of cells, which Morgan describes as a critical part of the harvest. The heparin solution is mixed with the cells to keep them from clumping together too much before entering the liver, and because the cells are infused by gravity, they can disperse more evenly throughout their new home. The blood vessels within the liver act as a branching tree, and when the islet cells reach the end of a branch, they extend the liver’s blood vessels and create their own new environment.

“By the third post-operative day, you can even measure some insulin being formed by the cells. It’s pretty remarkable,” said Morgan.

At a minimum, Cook says, the procedure can help protect patients from hyperglycemia and hypoglycemia — the dangerously high and low levels of blood sugar, respectively, that can occur when someone doesn’t have a pancreas. In most cases, however, patients are on little to no insulin following surgery compared to other diabetic patients.

“We have patients that aren’t on any insulin at all, or at least on very minimal amounts,” said Cook. “We consider the procedure a success if they are on less than 20 units of insulin a day, which 80% of our patients are. An additional goal is to rid patients of their pain medications, too, and improve their quality of life from constant debilitating pain.”

For comparison, a 175-pound person with type 1 diabetes could be on 40-64 units of insulin each day. Between 5 and 10% of diabetes cases are categorized as type 3c diabetes mellitus, which refers to diabetes arising from pancreatic disease according to a 2019 paper in Journal of Diabetes Research. A whopping 80% of these cases occur in patients with chronic pancreatitis.

Morgan points to her team’s history of taking care of chronic pancreatitis as a benefit for patients. “My mentors before me both in gastrointestinal surgery and gastrointestinal medicine had had a special interest in pancreatitis for decades,” she said. “So it was a natural progression for the team at MUSC Health to develop this sort of cutting-edge technology a decade ago. That history really provides a unique environment for taking care of the whole patient in addition to just offering them a treatment option.”

Cook points to working with patients as a huge benefit to her role on the team. “I love connecting with them,” she said. “They’ve usually been through so much by the time they find our team, and they’re excited to be here. It’s great to be part of their journey. A lot of patients haven’t heard of this procedure, and the hope it gives them is infectious. They’re given a new chance at life.”

If you have a patient you’d like to refer to the MUSC Health Islet Cell Transplant Program, please reach out to Kelsey Cook via email or 843-876-0420. Patients may also self-refer.